Final group to go live today is a mixed bag.

Some great figures in this group which to be fair have hugely under performed. 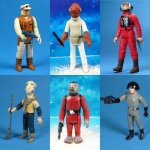 Who doesn’t love a red jumpsuit?

What a tight group…but the stand out Hoth rebel soldier and the fish man for me this time.

Yak and b wing for me

I've shown some love to the Rebel Soldier and Mr Face on this occasion.
S

Hoth rebel Soldier tops Group H with Snaggletooth joining him through. Death Squad Commander becomes the first first 12 figure to be eliminated.
You must log in or register to reply here.