Group K sees our forums defending champion take up his title defense, Yoda has always been popular but it took until 2021 to finally see him win. Runner up in 2020 and a semi finalist on no less than four other times (2014, 2015, 2018 and 2019) makes Yoda a formidable force. His victory last year made him the most successful figure ever across all the tournaments.

He will however have to displace the 2014 champion, Stormtrooper. Stormie has had one semi final since his victory but is nearly always a group clearer.

Looking outside of the two former champions, it's hard to see when the challenge will come from, Imperial Dignitary, Bespin Security Guard and Barada have never cleared the group stage, whilst Leia Hoth has only done so on two occasions before being eliminated in the second round. 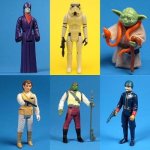 Imperial Dignitary grows on you

Leia Hoth and Yoda take this round for me.

yoda and leia hoth get my vote
S