Heres a project I put together a couple of years ago
Got this signed trading card from Lee on here, (i'm thinking it was him apologies if not)Ralph only signed his initials in later life due to parkinsons making his hands shakey, so I was glad to have this later signed item, yes I know its signed upside down but I like it like that

its quirky!
I added it to a shadowbox frame and included an action figure from his cameo in empire, this is one of my favourite items in the collection 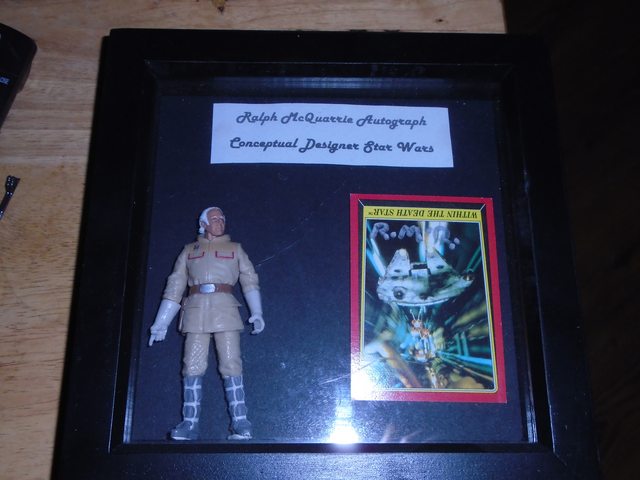 IF I WOKE UP TOMMOROW WITH MY HEAD SEWN TO THE CARPET I WOULDN'T BE MORE SURPRISED THAN I AM NOW
YOU SIT ON A THRONE OF LIES!
Top

I have a Mcquarrie signed framed print myself that I picked up from a local chap, looks good in my little star wars corner

Yeah really nice and thanks for showing it.

"What is thy bidding, my master?"
Top

thanks guys, yeah it is a cool piece glad to have it

IF I WOKE UP TOMMOROW WITH MY HEAD SEWN TO THE CARPET I WOULDN'T BE MORE SURPRISED THAN I AM NOW
YOU SIT ON A THRONE OF LIES!
Top
Post Reply
5 posts • Page 1 of 1