Here you can browse the popular 'toy of the week' threads which focus on particular characters or vehicles.
Post Reply
54 posts

Some great examples, no wonder he’s so hard to find MOC @spoons !

Amazing focus you have.

Here is my Kenner 31 A and childhood loose.

Snaketibe wrote: ↑
Tue Jun 16, 2020 2:37 am
Han Solo (Hoth Outfit). A truly essential figure for any young boy in 1980 who had seen 'The Empire Strikes Back'! It was one of the first wave of ten figures released for that film by Kenner, and it was a great one.... The colour they gave Han's jacket... not so much

. For an entire generation of fans, Kenner's incorrect colour choice for Han Hoth's jacket had us all convinced for decades that Harrison Ford wore blue in that film, when he did nothing of the sort! Han Hoth's jacket is, was and always will be brown, not blue... but try convincing die-hard 'blue-ists' of that!

Kenner's colour blindness aside, this really is a great figure. He looks like Han, you can shove him in a tauntaun, he comes with the right gun... what more could a child want?

Well, if I'm nitpicking, the ability to hold his weapon would be nice if you're talking about my childhood one, as his grip could barely manage it! A fact I guess Kenner became aware of, as later (I assume they were later at any rate) sculpts had the thumb modified by lengthening it so as to remedy that particular shortcoming.

This figure holds a special place in my affection. Growing up, my family was not very well off, and so for a Star Wars mad young boy like me back in 1980, Christmases and birthdays were a very big deal! They were a golden opportunity to rapidly expand one's collection and gain a bit of cash in readiness to hand it over to George Lucas. My uncle was a self-made man and (compared to us at least), much better off, and his presents to us were always great

. However, in an uncharacteristically unmercenary act on my part, when he asked me what I wanted for Christmas in 1980, I only asked for one thing; Han Hoth! I hadn't managed to track him down in the shops at a time which coincided with me having the funds to buy one, and so I asked my uncle to get me one. Bear in mind that at the time new figures were of the order of £1.25 - £1.50 each, and my uncle was used to spending more than that on my brothers and me, but that's all I requested that year. And so when Christmas arrived, a brand new shiny Palitoy Han Hoth duly became mine! However, even though that's all I'd asked for, my excellent uncle decided to add a box of Maltesers and a cheque for £7.50 to my stocking as well! Bonus!

Sadly, I stupidly parted with my childhood figures when I was still a child, but I never forgot my original Han Hoth, and even though I didn't keep my cardbacks either (my mother would never have tolerated me keeping 'rubbish' the toy came in), when I started collecting again in the 90's, it was high on my wants list. And a few years later when funds allowed, I also targeted a 30-back, which I'm pretty sure is what my uncle bought me.

, however in the meantime, there are lots of different variants to be had with this figure. There are different sculpts (including the aforementioned thumb, and also belt buckle and neck scarf), obviously different leg colours, including a chocolate legs Poch (not to be confused - as many an eBay auction does - with the more common dark legs variants), a tan-moulded legs variant, and other shades. He comes with a rainbow of different face paint shades, and there is also the famous PBP 'purple' jacket version (which isn't really purple at all, but it is a clearly different shade of blue to the others). And lastly, there's also that 30-back.

fantastic story about your uncle and that solo hoth figure

spoons wrote: ↑
Tue Jun 16, 2020 12:27 pm
Thats a great story @Snaketibe Jeremy, my favourite figure as a kid too but I dont really have anything to add to my story

Your 30 back is lovely, mine is creased with a yellow bubble and as for vairants you win there! The one loose figure I have that I dont think you do is this error. Odd legs and no paint ap to the front. A real Friday afternoon job 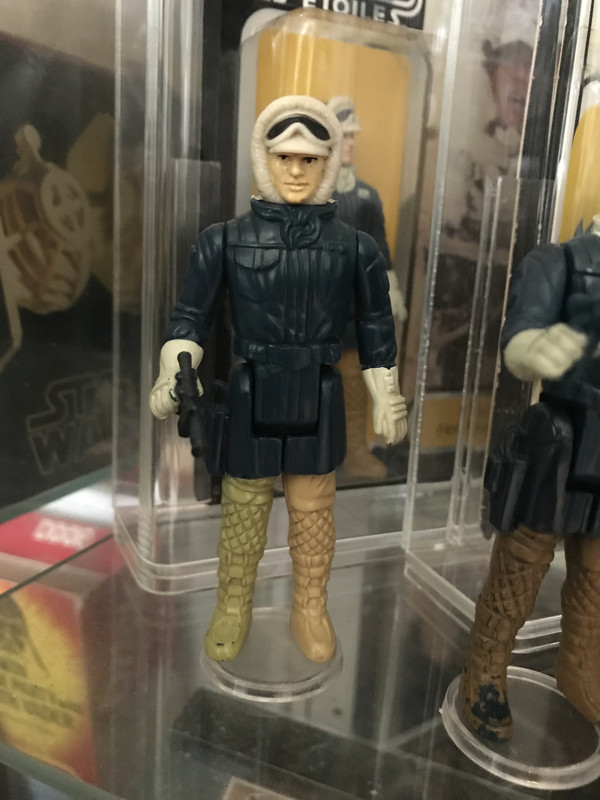 and other loose Han Hoths

Wow andy, awesome variants, thanks for sharing them. Does it ever stop how much more solo hoth do you have ?

I’m laid up with a gammy back at the moment so can’t photograph mine. I’ll add when I can but nothing as spectacular as either of you two sadly. I’d love to get my hands on a Molded legs, a purple jacket, and a chocolate legs.

What I can add is a little information.
Family I (2 line Coo with large copyright) was made in the Unitoy factory. This figure came with the v2 blaster from the TIG website. It is easily identified by its elongated thumb on the right hand.

I believe Unitoy stopped making Han Hoth from the 65c Emperor offer onwards. At this point the Unitoy moulds were sent to Kader and they released a no Coo version (which I believe) can be found in the US on Kenner 65c cards and onwards. They were also released for the European market. This figure is often found with a blue / black rather than black Kader v4/v5 blaster instead of the blue v2 blaster. You can see an example of this in Spoons’ China baggie with double weapons error.

The dark tan pants variant was also produced by Unitoy (though I haven’t yet determined which card Back they appear on being at the start of my research).

Family II (2 line Coo with small copyright) was made in the Smile factory. This figure came with the v1 blaster from the TIG website. They also made a no Coo version for the European market.

Family III (5 line Coo) was made in the Kader factory. This figure came with the v4 and v5 Blasters from the TIG website.

It is the Kader factory that is responsible for the moulded legs Han Hoth Figure.

Thanks mate for all the great info, I can't wait to see your collection

Mini99 wrote: ↑
Tue Jun 16, 2020 6:55 pm
I too can add to this one but not to the degree that others have done for this figure.
There are so lovely examples of this figure in collections and of course his great ability to holster his blaster.

Amazing focus you have.

Here is my Kenner 31 A and childhood loose.

Fantastic stuff! Thanks for sharing

ok forget about the pictures I asked for in the last post, I guess that they are in this thread on the link

Ha ha - was just about to send you there

Thanks for the nice words Lars, and two very mice Hans @theforceuk
http://www.vintagestarwarsdiecast.co.uk for all your vintage die cast needs
Top

Now we can call it an army there is 5

cool collection that you have, thanks for sharing it and thanks for the info about them

That's a nice line-up, Jay. It also looks a little like the figure on the left end also has mixed legs like @spoons one.

Some great examples everyone, one of the only figures that the gun can fit onto the holster as well.

Here are my collection

my variants, yes there is many variants to find between the solo hoth figures.