Hey Guys, had a nice day out yesterday at the London Film Comicon at Earls court yesterday. Despite queuing for about an hour to get in and there not being as much vintage as I would have liked (theres never enough!) We still had a good day.

I didnt stay for too long, maybe 2 and a half hours but managed to get round to see everything. One of the biggest problems was that it was manic in there. Almost too busy I thought. Darren from Starzone had a great stall as did Leicester Vintage and a few other had some nice bits.

Highlight of my day was seeing Stu (Burnsy) in his Fett suit. He really did look the nuts and I heard loads of people commenting on his outfit. 8)

Here is about the only pic that I got from the day of me and my two er (little) brothers Toby and Ollie with Stu. Just need my older brother to turn up for a full Caswell family outing! 8)
P

Awesome pic Chris. Will have to get down to that thing next time. I always seem to have something on when it comes around. :roll:

Great to see you Saturday and was fun plucking you from the queue.

I've been to a few of these and this was the busiest we have ever seen a convention. Apparently there were around 40,000 people
through the doors yesterday. The queue was bloody massive but it was great fun walking along having a bit of banter with the punters.

It was just too crowded inside and not good when in costume.

Just a shame I didn't have much of cance to have a browse and see some of the guests. 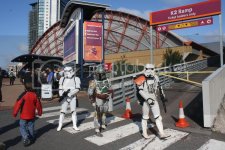 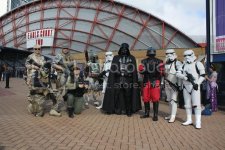 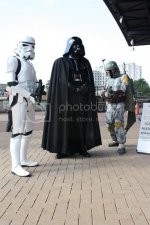 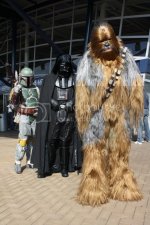 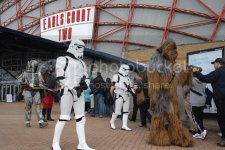 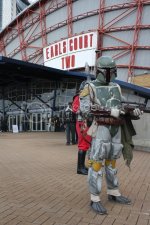 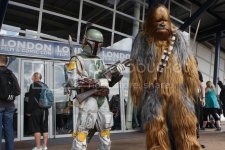 Who's the character in red and black next to Vader in the second photo?
P

Looks like an original series Action Force character to me.

I went yesterday too, the crowds were maniac. Starzone had his usual brilliant stuff and the other regulars had some good stuff, it was the most vintage I've seen for a while.

Is the guy that plays vader a bit short as the costume seemed to have a really fat neck, so I'm assuming that he's lifted up the helmet to give it extra height.

The guy in the photo's above is over 6ft tall, there was another Vader walking about who looked terrible.
P

I was thinking of these guys (outer left and right). Similar but not the same. 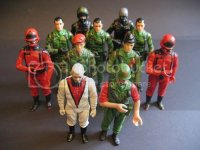 i didnt see anyone i knew there yesterday but met a few today... the chewie looked good

That's why I didn't have a clue who he was then!

Many thanks Chris for the Canadian ESB Falcon you picked up for me!

Great pics Jason. That Dr. Who costume is fantastic! :lol:

Pete, I do worry about you. All the stuff with the Ewoks is bad enough but of all of the pictures of fit (ish) birds, you pick the bloke out !!

:lol: :lol:
His costume reminds me of the insane costume party we had at my work earlier in the year. One guy was dressed as the Mona Lisa another guy as a giant Lego Man (his was incredible) and another costume was Marty McFly, The Doc and The Back to the Future car... all as one costume. :lol: I kept it simple and went as Adam Ant.
J

They're not my pics, I just know where to look...

Jason
You must log in or register to reply here.