Hmmm....
Whilst I've enjoyed elements of BOBF, overall it just isn't clicking with me so far.
The flashbacks have been great, but some of the Mos Espa artistic/writing choices have been frankly bizarre.

Episode 3 featured a street gang that looked totally out of place. Not sure if it was the fashions or the Pee Wee Hermann speeders. The chase sequence (with the godawful majordomo) appeared strangely laboured.
Black Krrsantan appeared, duffed up Boba and two seconds later the Hutt Twins appear and apologise with a gift of a Rancor. WTF.
I know it's only episode 3, but I'm still hoping that things improve as the series has potential, but at the moment it seems they're trying to stretch out a paper-thin plot.

Agree about episode 3. Nowhere near as good as the last one. The Vespa speeders were awful and that chase did indeed seem terribly laboured and was just plain dull. Those guys didn't fit in at all and would've been more at home in some trashy modern sci-fi TV show. Disappointing!

Will hopefully get back on track next week...

Yeah, that was the worst chase seen ever

and wasent expecting that with the Wookie, that was over pretty quick he only came into it last episode. The mandalorian looks and feels so much better right now.

I totally agree with all of the above as well about episode 3. The street chase just wasn't exciting and actually looked quite slow in places. The one in Solo was much better and I do feel like this show could easily damage Boba Fetts character longterm for some people.

I'll wait until this whole series plays out to pass any real judgement (they do still have 4 episodes to go after all), but maybe this will lower the Fett tax on toys a bit lol!

So far the mandalorian is better than the book of boba fett, but there is also many good things in the series. But I also think that the Kintan strides from episode 2 looks to much like human bikers, like Hells Angels and the mos espa street gang 4 speeder bikes looks also to human and to ugly, I do not like that. Star wars has always been about not looking to much like our world. I love the Rancor, I have just hoped to see it eat an enemy of boba I also did not understand why boba did not ask the wookie to join him as he did with the others

Yeh agree with all comments, this episode didn't quite work for me. The cyborg biker 'Borg style' gang seemed out of place on those Quadrophenia style mobility scooters, it was more like the scene out of Harry Hill the movie

. The BK scene was the best part for me and looks like BK will be back to team up with boba later. Was expecting the Hutts to hang around a few more episodes/story lines but looks like that's it?? and looks like the most powerful players are yet to show their hands. The Racor gift and keeper were good introduction and will look foward to him riding his new pet Rancor in a future episode, also enjoyed all the Easter Eggs spotted Peli the mechanic and her droids, the crashing through the Ralph McQuarrie painting of Jabba the Hutt with boba fett standing next to him. See what the next episode brings, lets hope the cyborg biker gang gets taken out by the Pykes.

I new i'd seen that biker scene somewhere before

Agreed wasn’t the best, hoping he gets off world in Slave 1 soon. I know the story isn’t about other worlds, but this is Star Wars!

I have to say I agree with all the comments about episode 3 above. Those space-Lambrettas and their owners were painfully shite and the chase just dreadful.

I am still enjoying the show overall, but I can't help feeling Boba Fett himself needs more of an edge. Considering he shot Bib Fortuna on sight at the end of the last season of 'The Mandalorian', I didn't then expect him to instantly forgive or ignore everyone that's crossed or attacked him in 'The Book of Boba Fett'. He needs to be more dangerous... more of a badass.

Hopefully it will improve, but I definitely felt this episode was the weakest of the first 3 by far.

Note how no one dies really. (LOL tuskens offscreen LOL) It is far more child friendly then Mandolarian suprisingly. The underworld isn't very underworldy. Would gangsters really let killers like Chewblacka loose? Boba is a bit "chubby friendly dad" and not "absolute killer" - And note how no one respects him in the universe. He is supposed to be some major infamous bounty hunter, yet everyone treats him as a beta male nobody. Compared to Mando again, he comes across weak, old and squidgy. When he should be Mando++

Plus, the power ranger woke urban bike gang was a bit 2022 disney. And did not fit a tatooine vibe at all. And a bit over powered compared to... everything else really.

But still enjoyed it! 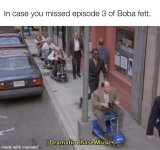 One of the Lambretta style speeders even has mirrors on the front. I suspect Jimmy and Steph will turn up next week after a trip to Brighton.
If BK is so hard, why did he run away?
Episode was poor after last week's.

Still not feeling BOBF !!!! It's got to seriously improve surely, the scooter gang were really a laughing stock.

Fingers crossed the next episode turns my opinions on its head.

Now that was more like it! Another great episode, really enjoyed all the backstory and insight into why he has changed his ways. The Sarlacc was awesome and Krrsantan was excellent.

Agreed, great episode. Now they just need to explain that the Sarlac Pitt makes you gain 50 Kilo if your ingested by it.

A definite return to form, thankfully.
Loved the episode overall. Boba finally shows his ruthless streak by obliterating the swoop gang. The Sarlaac and Black Krrsantan scenes were also great.
There was also a hint of Mandos return in the final scene.
Still a few niggles...the Cyborg Mod Squad are still totally out of place (the EDM soundtrack didnt help either).
I could have done without the silly droid chase as well.
Still, a major improvement on Ep3 and I'm looking forward to the next instalment.

Yeah was much better, they only thing was the short circuit scene with the droids but the rest was pretty good

The Mod mods are naff but I see what they are trying to do (a sort of American Graffitit homage but 20 years later) - but I enjoyed episode 4 as well. Boba is growing as a human being.

Once again I must agree with all of the episode 4 comments above. Overall, I loved the episode! As stated, a return to form, and also an episode that finally starts to explain the changes we've seen in Boba. The discovery of Fennec and the filling in of their backstory was most welcome and very well done, I thought. Yes, the droid chase and the bionic youths were out of place, but at least Fennec's own mods are explained.

My only real gripe is the woke pandering by not having Boba Fett correctly name his own ship! Yes, the ship is a Firespray model, but it's been named 'Slave 1' since the time of Jango. We know it, the fans know it, and Jon Favreau certainly knows it. It may never actually have been called 'Slave 1' by anyone on screen, but all of the books, toys and supplementary materials have told us what the name is for decades! However, Disney are now suddenly seemingly terrified of being accused of racism by using the established name. How ridiculous! George Lucas isn't racist, and I have no doubts whatsoever that the name 'Slave 1' had absolutely nothing to do with African American slavery when it was coined. Slavery is an obscenity, and it has sadly existed for millennia, but by no means have all slaves always been black; that's an all-too-common insular American view of it, where many Americans seem to assume 'their' kind of slavery is the only kind there's ever been. All slavery is evil and wrong, but 'Slave 1' is just a name, nothing more. It didn't hurt kids to have a toy with that name in the 80's and 90's, so why is it suddenly a problem now?

*steps down from soapbox*

Totally agree regarding the Slave 1 controversy.
If anything, by removing the name, they've attached a slavery connotation where none existed before. Absolute morons.

They got their knickers in a twist about the Slave Leia moniker as well, if I remember rightly. Pathetic pandering.

Anyway, they can call it what they like. It will always be Slave 1 to me.